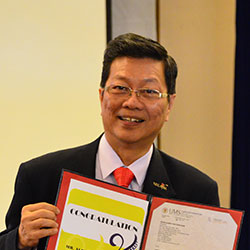 A graduate in Economics (Honours) from the University of London in 1977, Albert Teo has been in the tourism industry for the last forty three years since 1977. After fourteen years running a family hotel, he ventured out to set up his own inbound tour company, Borneo Eco Tours in 1991 and an ecolodge, Sukau Rainforest Lodge in 1995. In 2007 he set up his non profit society, Borneo Ecotourism, Solutions and Technologies (B.E.S.T) Society. In 2015,

In October 2006, he was appointed Adjunct Lecturer by Edith Cowan University ECU, Australia, for his contribution to the ecotourism industry, and in 2012, conferred a Fellow of the University for his work with the university as well as his philanthropy, community and social work. In March 2016 he was appointed an Adjunct Professor of University Malaysia Sabah UMS.

Albert has served in various capacity in the tourism industry including: Sabah Chapter Chairman of Malaysian Association of Tours and Travel Agents (MATTA) 1996/2001; Chairman of the Sabah Tourist Association 1985/86; Board of Advisors to The International Ecotourism Society (TIES) 2010/15, USA; Marketing Committee, Sabah Tourism Board 1996/2017. Albert was also a member of the finalist selection committee for the Tourism for Tomorrow Awards of the World Travel and Tourism Council (WTTC) for five years. Albert is presently Charter Member / Vice Chair of Asian Ecotourism Network AEN and founding board member of Global Ecotourism Network GEN. In 2019, Albert was recognized with a Special Minister’s award in 2019 at the Sabah Tourism Award Night.

A keen photographer, he has also trekked over 1000km in Borneo, as well as published ten books; some of these include the best-selling "Sabah-Land of the Sacred Mountain", "Journey through Borneo", "Saving Paradise-The Story of Sukau Rainforest Lodge" co-authored with Carol Patterson, and the latest book "A Souvenir of Sabah Malaysian Borneo" .

Albert is presently focusing his energy on developing social entrepreneurship through his community/environment foundation, Borneo Ecotourism Solutions and Technologies, or BEST Society. Among the many projects is an integrated community based tourism project named Kiulu Farmstay and 7.7 acres of forested land which BEST Society has bought in 2017 under Borneo Land Conservancy BLC for the purpose of conservation as a wildlife sanctuary and a research centre under Sukau Ecotourism Research Centre SERC in Sukau.