The story about Helson Hassan is quite a remarkable one and his journey to becoming a conservationist is nothing short of inspiring. Born and raised on an island off the coast of Sandakan, Helson grew up in a humble fishermen village. For most boys who are born and raised in a fishermen village, it is likely that they would be destined to be a fisherman themselves, just like their father and their father’s father before them. For Helson however, it was a destiny short-lived.

After being a fisherman for some time, Helson broke out of the cycle and found himself leaving his island home to venture into more unfamiliar waters. He found himself in the tourism industry as a tourist guide and from there, he was able to pick up new skills and knowledge, which also ignited his love towards flora and fauna. 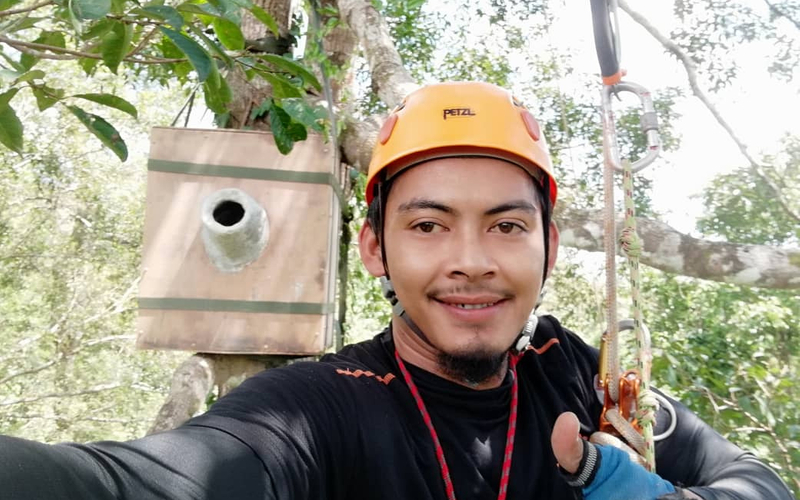 It was through his experience as a tourist guide that allowed Helson to land an opportunity as a Research Assistant for the Hornbill Project at Kinabatangan. Having no background or experience in research, the opportunity was a serendipity moment for Helson whom today, enjoys and finds purpose in his work.

“I never expected to become a Research Assistant ‘cause I don’t know anything about being a researcher. But when a friend recommended the job to me, I decided to take it up as a challenge and to go for it just for the experience,” said Helson when asked how the opportunity came about.

Helson is the Research Assistant to Ravinder Kaur, a graduate of Universiti Malaysia Sabah, Research Assistant at Universiti Malaya and Founder of social enterprise Explore Gaia Enterprise. Gaia is an enterprise that is dedicated to wildlife conservation in Malaysia through increasing awareness and appreciation of wildlife in Malaysia. Gaia is also a partner of HUTAN, and together, they are championing the Kinabatangan Hornbill Project since year 2014 until present.

As a Research Assistant, Helson helps to restore the natural tree hollows found in the jungles along Kinabatangan River to make them suitable for hornbills to breed and lay their eggs. These abandoned tree hollows will need to be restored because they tend to shrink and close-up overtime. A few months after restoring tree hollows and cavities, Helson witnessed that the hornbills will then start to use them again, which is a sight that brings hope to the hornbill conservation effort.

Hornbill birds normally nest inside existing tree cavities made by other wildlife in the jungle such as sun bears foraging for bugs in tree trunks, woodpeckers and other animals that have abandoned the hollow which used to be their home. Because of deforestation, these trees with these hollows are becoming scarce in the jungle, making it more difficult for hornbill birds to find a suitable place to breed and nest. This is one of the factors that is contributing to the dwindling number of hornbill birds in the wild. Which is why the hornbill project and the work that Helson does is important.

“After my first year of working together with Ravinder Kaur, I see that there is a future for me as a conservationist. Before this, I was only a guide who knew the names of the eight species of hornbill birds in Kinabatangan, but I did not know how many they are, how do they nest, what they eat. It was during my first year that I learned a lot of new things especially from my superior,” added Helson.

He has been part of the project for almost three years now and is incredibly passionate about his work in hornbill conservation- Which like many conservation efforts, is truly important and crucial for the survival of these endangered birds.

Besides restoring tree hollows, Helson and his team build and set up artificial hornbill nest boxes for hornbill birds to breed and lay their eggs whilst studying the hornbill birds. However, it takes a lot of patience and perseverance as the artificial nest boxes have a no guaranteed success rate. There are a lot of factors to consider when building the artificial nest box, such as the type of materials to use, the temperature, humidity, size of cavity and hollow, as well as the height of box from ground level.

Helson is currently collaborating with Sukau Rainforest Lodge by building and setting up an artificial hornbill nest box at the lodge. He is also monitoring the camera trap they he set up there, and after 6 months, the nest box has received visits from Bushy-Crested hornbills and Oriental Pied hornbills. So far, these hornbills are still surveying the nest box, and we hope they will make it their home in the future. 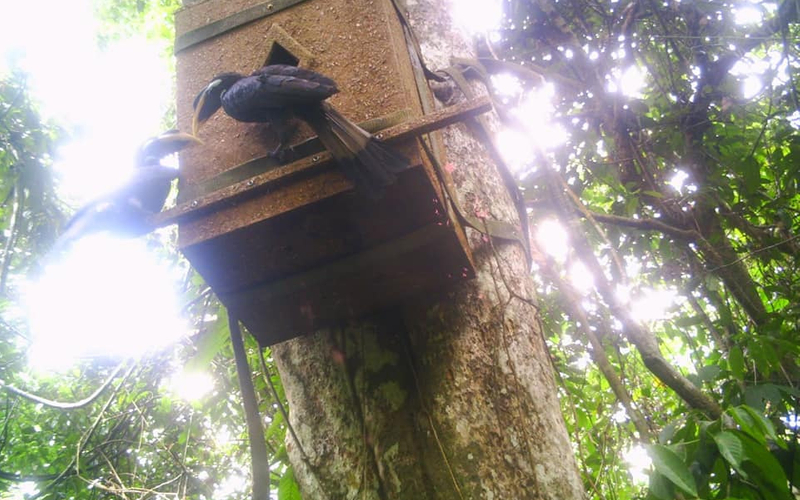 When asked if he saw himself still doing the same thing in years to come, Helson passionately stated that he hopes to be involved in conservation for as long as he can and work on conservation efforts in Kinabatangan, which not only focuses on hornbill birds but also the conservation of other wildlife such as the Bornean pygmy elephants and Orangutans.

For more interesting stories like this, check out our Wild Borneo Magazine here!