I attended the Borneo Bird Festival for the very first time this year at the Rainforest Discovery Centre (RDC), Sepilok and had no idea what to expect. It was a 2-day fun-filled event which happened over the weekend from 26 to 27 Oct 2019.

Though I’ve heard about Borneo Bird Festival and know that it’s an annual birding event, it’s all very new to me. So basically, it was a birding debut for me; an amateur with no birding background, armed with only a pair of binoculars which I shamefully borrowed, and a sense of curiosity and excitement coursing through my veins.

I was lucky enough to be grouped together with some really cool people, who like me, were also totally fresh to the birding scene. We were also accompanied by a wonderful guide, Ronny, who made the entire experience all the more worthwhile for us. 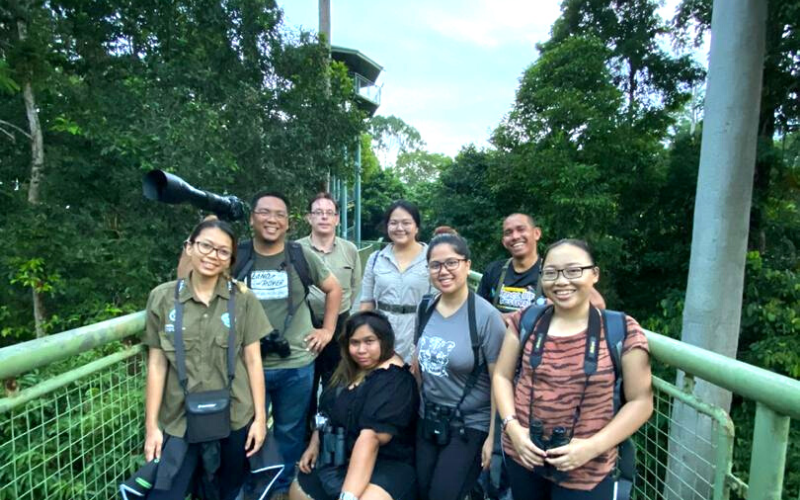 Another best part about this Borneo Bird Festival trip is the new friends I got to made- Brought together by ‘birding’.

Though we weren’t participating in the Bird Race, which is the main highlight of the event every year, we were still able to enjoy searching for birds around the Rainforest Discovery Centre area. We also got to know other birding enthusiasts, and though they were far more seasoned than we’ll ever be, these guys were super welcoming to the rest of us amateurs and were even nice enough to let us tag along in their bird hunt. 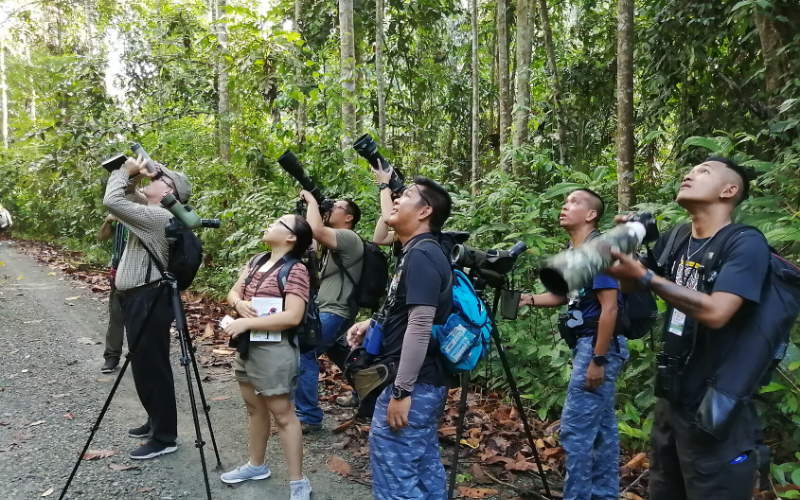 With the other birders we bumped into

If you think birding is only an activity for people who are more “experienced” and not suitable for the younger generation, think again.

One of the birding enthusiasts that I got a chance to meet was ‘Bird Boy’ Alexander John. Though it was a brief meeting, I learned that Alexander is one of the youngest birders in the group, and at only 17 years of age, he showed much passion and enthusiasm in birding. He’s also an incredibly talented photographer of not only birds, but wildlife too! I got a chance to see some of his work during a talk he gave about his “Birding Adventures” and was blown away by the quality of the shots he took.

It’s really young people like Alexander who inspire me, and I do hope his passion and enthusiasm towards nature will also inspire our local youths to venture into birding or wildlife photography. It’s also these things that will instil a sense of love and appreciation towards our environment, which in this day and age, is truly crucial. I really believe that youths today play such a huge roll in making sure that the rich biodiversity we have here will continue to be conserved and protected. 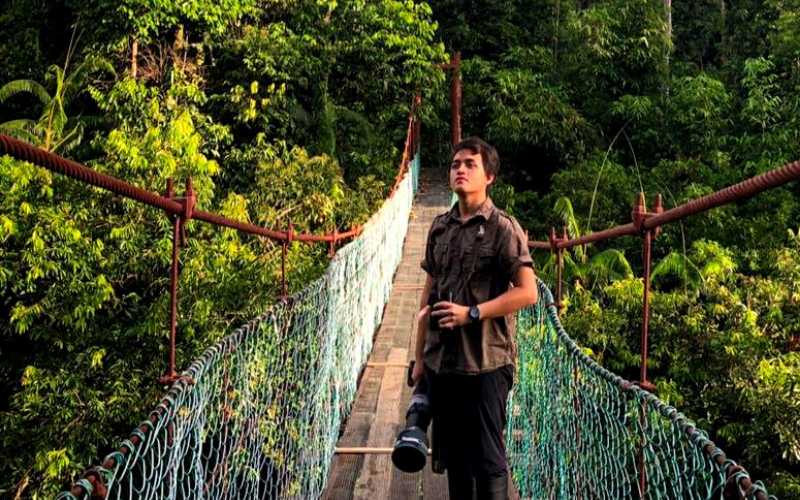 Alexander John in his natural element, amongst nature.

Other than that, it was definitely refreshing to know and see that the marshals for the participating team were juniors, aged 17 years old and below. These guys were trained by their senior birders and I really think it’s a wonderful way for the youths to gain the exposure they need to further sharpen their skills and knowledge on birding.

My hopes are that more of the younger generation will be into birding and participate in the upcoming Borneo Bird Festivals that’s to come. No one is too young or too old to get into this hobby, and it’s definitely never too late to start! 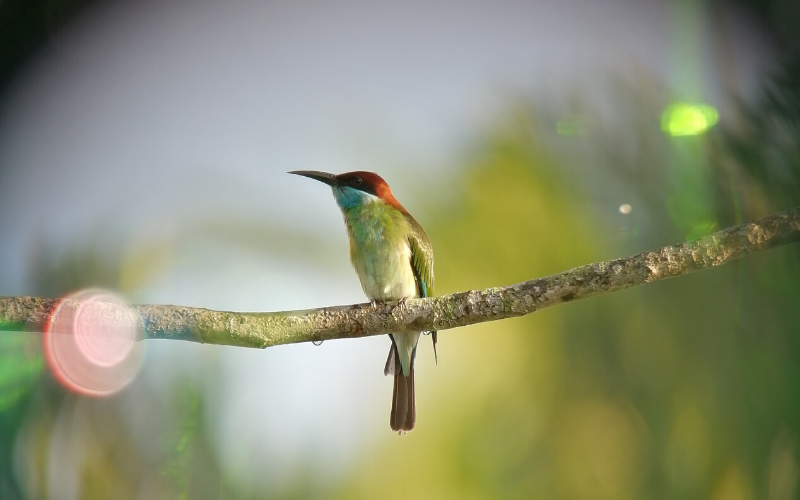 During our two-day birding escapade, we saw quite an array of birds around the area, beginning from the RDC carpark area up until we delved deeper into the forest reserve. Just a quick tip; if you’re participating in the Bird Race, it’s always good to start off at the car park area first, where some bird species are much easy to sight there. Once you’re done there, then move on into the rainforest reserve.

The first few birds that I managed to spot were the Blue-throated bee-eater, Greater green leafbird, Red-eyed bulbul, Ornate sunbird, Thick-billed spiderhunter and Yellow-rumped flowerpecker. These were seen around the carpark area. There, we were also greeted by a group of graceful Bushy-crested hornbills inflight, which left some of us (especially me) wide-eyed in wonder. 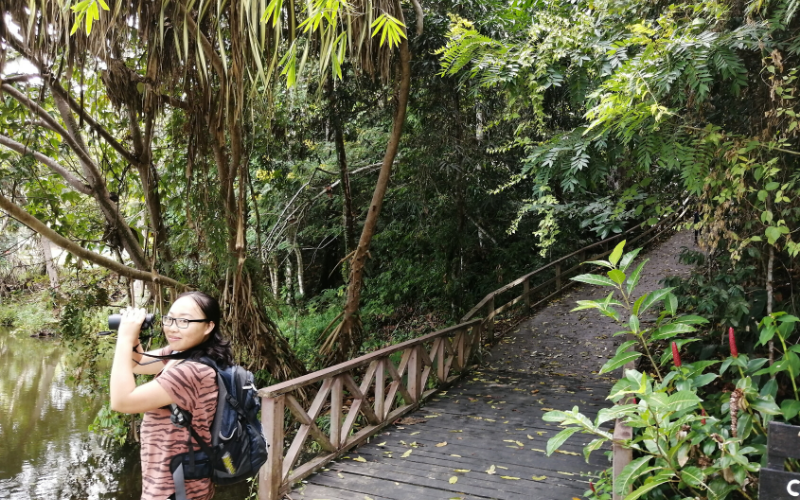 Our friend, Elsie from Sabah Tourism Board at the Rainforest Discovery Centre

Because it was my first ever birding trip, one can only imagine the number of ‘lifers’ I spotted. For me, it was honestly one excitement after another. And for a newbie, I thought the list of birds which I saw was quite an achievement for myself, though it was nothing compared to the long list of birds sighted by the participants.

*Lifer: (noun) The term lifer refers to a bird species when it is first seen and positively identified by an individual birder.

Besides the beautiful birds that we got to see, for me two of the greatest highlights of this whole experience was observing a wild orangutan on the first evening feasting on some fruits before it started building its nest on a treetop and called it a day. It was truly fascinating! On that same evening, we also waited as the sun was about to set and witnessed a Giant Red Flying Squirrel appearing out of an artificial nest box which was its home, and effortlessly swooped and flew above us! What a sight! You can check out the 3 second video of the orangutan below:

The next morning brought us another treat where we encountered the same orangutan from the previous evening during our guided morning walk at RDC. We observed it for a good ten minutes or so, just moving from tree to tree until it disappeared out of sight into the rainforest. It was truly special. Sadly, the photos and videos I got of all these moments aren’t clear! They’re just etched into my brain and I really hope it stays with me for a lifetime. 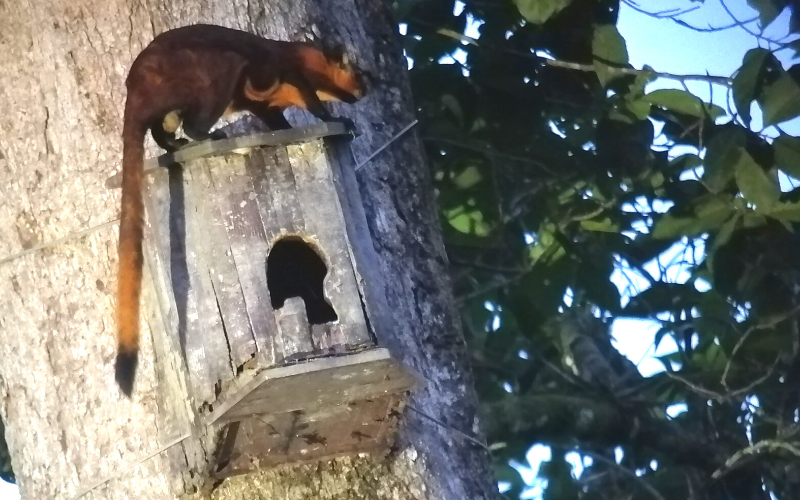 I must say, one of my favourite parts about the Borneo Bird Festival is actually the location of the birding event. Personally, I absolutely loved every bit of my time exploring the trails of Rainforest Discovery Centre. It was almost magical-like just being surrounded by the lush nature there. It really made me stop to appreciate nature at its finest. Borneo is truly so blessed!

Here’s the list of birds which I saw on this trip: 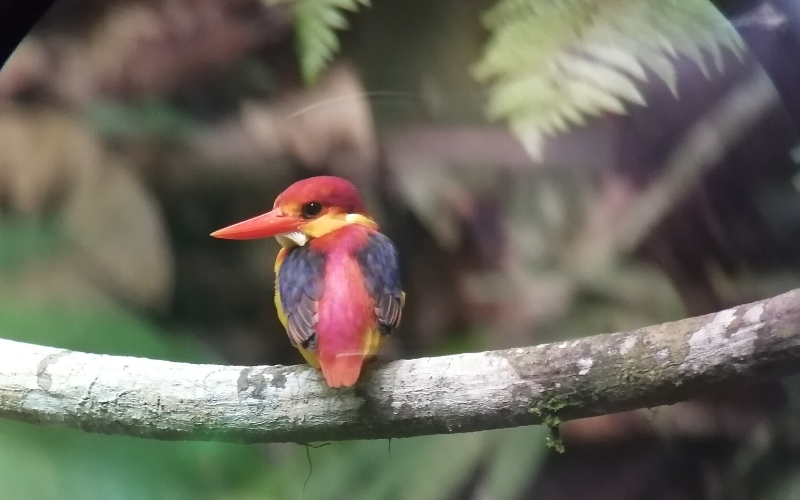 On this trip, I only spent 2 hours each morning from 6.30am to 8.30am for two days and another 2.5 hours on one afternoon from 4pm to 6.30pm at Rainforest Discovery Centre. Imagine if I actually spent more time there- that would mean more sightings of birds and other wildlife wonders!

Special thanks and shout out to Sabah Tourism Board, Borneo Bird Club and Sabah Forestry Department!