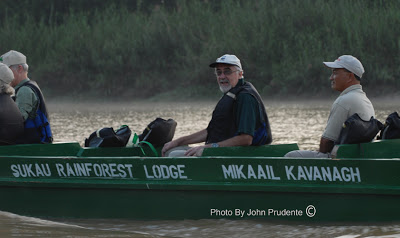 We recently had the privilege of interviewing ardent environmentalist and former CEO of World Wildlife Fund (WWF) Malaysia, Dato’ Dr. Mikaail Kavanagh whose amazing work is an inspiration to us.
Surprisingly, Dato’ Mikaail’s career didn’t revolve around being an environmentalist at first, though he was passionate about it. Upon graduating, he started out at the JWT advertising agency in London during the late 1960s, where he rose rapidly to become a Senior Account Representative. His career path in conservation only began after he made an incredible switch to ten years of studying primates in the USA, Colombia, Cameroon and finally, Malaysia. 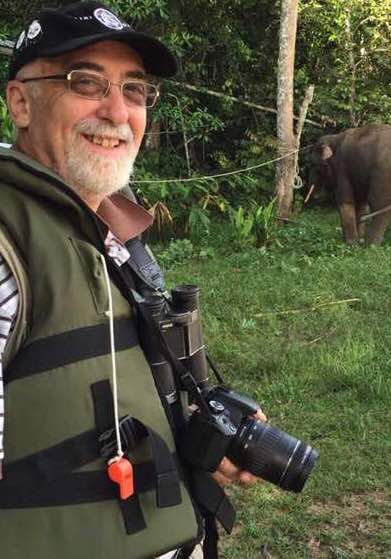 Dato’ Mikaail during his last trip to Sukau. A Borneo Pygmy Elephant can be seen in the background.

Check out his interview to learn more about his story and significant work in conservation in this interview.

1. WHAT INSPIRED YOU TO TAKE ON THE PATH AS AN ENVIRONMENTALIST?

Books! Growing up in a London suburb, I was inspired by my father’s old books on adventures with wildlife in the distant tropics, as well as by seeing nature in English suburbia. I also devoured – among others – David Attenborough’s BBC Zoo Quest books and Gerald Durrell’s stories of animal collecting. I wanted to be like them, having adventures in wild places with wild animals.
As a teenager, I wrote to Attenborough to ask him how to “get a job like his.” His kindly given advice to study zoology at University changed my life. It was not easy for an average schoolboy, as I was, to believe that university was possible for me. But I became determined from that point on.

2. YOU FIRST CAME TO MALAYSIA IN 1978. WHY MALAYSIA AND WHAT WAS YOUR EXPERIENCE LIKE WORKING IN THIS PART OF THE WORLD FOR SO MANY YEARS?

After studying monkeys in Colombia and Cameroon, I was engaged as the in-country lead for Cambridge  University’s contribution to a 3-year primatology programme in collaboration with Universiti Kebangsaan Malaysia and Universiti Pertanian (now Putra) Malaysia. It combined
academic work with conservation and team management. I experienced some of the most biodiverse places on the planet in Malaysia, as well as working with NGOs and relevant government agencies at Federal and State levels.
In 1981, WWF-Malaysia engaged me to lead a management survey of the proposed Lanjak-Entimau-Orang Utan Sanctuary. This came under the National Parks and Wildlife Office of the Sarawak Forest Department. It was an amazing chance to experience Borneo, both in a forest camp that was so remote, and in Iban longhouses.
One special memory was an unexpected development in surveying orang utan populations. After one short overflight in a RMAF helicopter, 3 colleagues told me that they had seen orang utan nests from above. I instantly saw the possibility of developing systematic aerial surveys. I got everyone together to plan a trial run and RMAF gave us an hour’s flying time. It worked beautifully and is now a standard field method that can tell you more in an hour so about orang utan populations then traditional ground surveys can tell you in months.
Lanjak-Entimau became Malaysia’s largest wildlife sanctuary in 1983 which was a great achievement for everyone involved.

Nature conservation is no longer seen as a luxury. It has been brought into the mainstream, albeit sometimes in competition with other land-uses that may destroy natural habitats. Sabah and Sarawak have played major roles throughout, probably because they have very strong indigenous cultures that understand and respect humanity’s dependence on biodiversity; and they have strong State departments for forest, marine and wildlife management.
Sabah pioneered the link between tourism and nature on Borneo, providing life-changing experiences for people who got their first taste of the forests and seas. This did not just teach huge numbers of them of the values of these endangered realms. It has also helped to protect nature’s gems because of tourism’s role in bringing wealth to local communities, as well as to private enterprises at home and abroad. This has strengthened awareness of how nature conservation can pay for itself.
Finally, where expats and immigrants played many of the major roles in the 1970s, there is now a wealth of qualified and committed Malaysians doing this. Of course, there should always be
international co-operation for conservation and we should be proud that Malaysia now participates in this with its own globally credible expertise.
Continue reading Dato’ Mikaail’s interview in our 72nd issue of Wild Borneo. Click here to read more!