[vc_row][vc_column][vc_column_text]If you’ve been to Borneo’s tropical jungles, you’ll know they’re a really noisy place! Over 200 species of mammals, 400 birds, 100 amphibians, and 300 fish call them home, after all. But the times are changing, and not for the better.

Many of these animals have “vanished”, or forced into deeper parts of the wilderness. And in their absence, parts of the once thriving Bornean rainforest have now fallen silent.

With the ever-constant threat of poaching, illegal (and legal!) deforestation, and climate change, Borneo may soon face the very real possibility of losing some of its most iconic wildlife, including…[/vc_column_text][vc_single_image image=”3034″ img_size=”full”][/vc_column][/vc_row][vc_row][vc_column][vc_text_separator title=”The Bornean Orangutan” title_align=”separator_align_left”][vc_column_text]Orangutan means “person of the forest” in the Malay and Indonesian language. And as their name suggests, they cannot survive without the forest.

The orangutans are dwindling in numbers due to loss of habitat, as the trees they call home are cut down to make way for development. Some have even been burned and killed by the fires intentionally started to clear large forested areas, while the brutal bushmeat trade and illegal poaching have left many of the younger orangutans orphaned. Stranded, without the guidance of their mothers, the juvenile apes have no hope of surviving in the wild.

According to anthropologists, if no serious effort is made to overcome the threats that these beautiful creatures are facing, Borneo’s most iconic animal may soon be extinct in as soon as 10 to 20 years.[/vc_column_text][vc_separator][/vc_column][/vc_row][vc_row][vc_column][vc_single_image image=”3035″ img_size=”full”][vc_text_separator title=”The Proboscis Monkey” title_align=”separator_align_left”][vc_column_text]Ah, the strange but unique Proboscis Monkey. Also known as the long-nosed monkey, or bekantan in Indonesia, these unusually large-nosed mammals are endemic to the island of Borneo. They co-exist with the Bornean Orangutan, living together in more or less the same types of habitat. Sadly, this also means that they face the same loss of home and threat of extinction as their ape neighbours. In addition to deforestation destroying their habitat, they are also illegally hunted in some areas due to the species being treated as a delicacy and key ingredient in traditional medicine.

In the past few decades alone, the Proboscis Monkeys have seen their population decline by more than 50% – a worrying trend that continues to this day.[/vc_column_text][/vc_column][/vc_row][vc_row][vc_column][vc_separator][vc_single_image image=”3156″ img_size=”full”][vc_text_separator title=”The Bornean Sun Bear” title_align=”separator_align_left”][vc_column_text]The world’s smallest bear species! These roguishly charming mammals are also known as “honey bears”, using their long tongues to deftly steal honey straight from beehives. But for all their playfulness and endearing qualities, they remain a big target for poachers, who mercilessly kill the bears for their gallbladders. Habitat loss has also hit them pretty hard and remains their biggest threat, with their lowland forest habitats disappearing at an alarming rate.

Sun bears faced a population decline of over 30% in the past 30 years, resulting in their current listing (by the International Union for Conservation of Nature) as Vulnerable to Extinction.[/vc_column_text][vc_separator][vc_single_image image=”3033″ img_size=”full”][vc_text_separator title=”The Bornean Pygmy Elephant” title_align=”separator_align_left”][vc_column_text]With diminutive bodies (for an elephant, that is), larger ears, longer tails, straighter tusks, and a remarkably gentle demeanour, Borneo’s pygmy elephants are unmistakeably unique and undeniably adorable. They are also among the wildlife most affected by uncontrolled logging and development. Having lost their usual habitats and migratory routes, Pygmy elephants are increasingly driven to encroach upon human settlements. This leads to conflict, especially between elephants and farmers, who stand to lose their livelihood due to eaten or trampled crops. Deaths sometimes occur from both sides as a result of these intense encounters.

Only 1,500-2000 individuals are reported to be living in the wild today, found only in certain regions of Sabah and Kalimantan.[/vc_column_text][/vc_column][/vc_row][vc_row][vc_column][vc_separator][vc_single_image image=”3732″ img_size=”full” add_caption=”yes” alignment=”center”][vc_text_separator title=”The Sunda Pangolin” title_align=”separator_align_left”][vc_column_text]Few people know of the existence of the Pangolin, whose name comes from the Malay word pengguling, which means “one who rolls up”. And true enough, these shy creatures would often roll up at any sign of trouble, protecting their soft underside with the large, protective scales covering their backs. They’re also known as scaly anteaters due to the fact that they share the same diet: ants and termites!

Sadly, they are also considered to be the world’s most trafficked (non-human) mammal, accounting for as much as 20% of all illegal wildlife trade, largely due to the erroneous belief that their keratin scales have medicinal properties. The Sunda Pangolin, a species of pangolin found in parts of Southeast Asia including Borneo, is currently listed as Critically Endangered by the IUCN – and their numbers continue to dwindle by the day.[/vc_column_text][/vc_column][/vc_row][vc_row][vc_column][vc_separator][vc_single_image image=”3032″ img_size=”full”][vc_text_separator title=”The Sumatran Rhinoceros” title_align=”separator_align_left”][vc_column_text]Borneo is also home to the smallest rhinoceros in the world, the Sumatran Rhinoceros. They were once found far and wide throughout Asia living in rainforests, swamps, and cloud forests. Now, the only wild populations can be found in Kalimantan and Sumatra… with their numbers estimated to be fewer than 100! Just like other rhinos, Sumatran Rhinoceros have been overhunted for centuries, which is a major reason for why their population is so low today. Their horns can fetch as high as US$30,000 per kilogram and are coveted for their supposedly medicinal properties… though there is no evidence whatsoever to support their effectiveness.

In Malaysia, the Sumatran Rhino is extinct in the wild. Only a pair, one male and one female, currently exists in captivity. If they do not successfully breed – and history has shown that breeding outside of their ecosystem can be difficult for this species – then these rhinos can be considered to be functionally extinct in Malaysia.

UPDATE: As of March 2020, the Sumatran Rhino is extinct in Malaysia after the country’s last rhino, Iman, died of cancer on a somber November 2019. The last survivors of this majestic species live in the wilds of Sumatra and Kalimantan – it is believed that fewer than 80 of them currently remain.[/vc_column_text][vc_separator][vc_column_text]Today, the Sumatran Rhino’s continued existence lies in the balance. While Orangutans, Proboscis Monkeys, Sun Bears, Bornean Pygmy Elephants, Pangolins and many other animals of Borneo may soon share the same fate.

The bad news is that mankind is the greatest contributing factor in these animals’ decline. And the good news? We are also their best hope at making it through. Spreading awareness goes a long way towards ensuring that some action is taken. In 2017, a group of conservationists including Sir David Attenborough’s passionate pleas famously stopped the building of a bridge across the Kinabatangan river, which would have further disrupted wildlife migratory routes. Imagine what we could achieve if everyone were on the same page and fought as passionately for Borneo’s wildlife!

Want to help out in some way but don’t know? Visiting the conservation centres for these endangered animals is a good start! You get to watch their fascinating and sometimes adorable habits, while also learning about their plight and supporting their conservation at the same time. 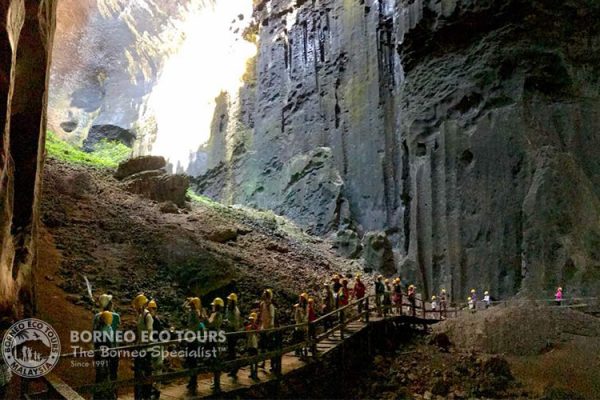